Alumni respond to story on the end of desegregation

“I sit here, my day interrupted, real tears streaming down my face, ashamed and disturbed to learn that a place that I owe so much to has been let down by me, so many others who I believe in, and by the city that has benefited so much from it.”

That’s West Charlotte High School alum Damion White, writing an August 27 Facebook post about a feature story in our September issue, “The Fall of the Lions.” The story explores how West Charlotte has changed in the 15 years since a court order ended desegregation in Charlotte-Mecklenburg Schools.

That order, issued in September 1999, said students could no longer be assigned to certain schools based on their race. It had a dramatic impact on West Charlotte, which was once considered a model of desegregation for the country. White kids were bused there from some of the city’s wealthiest neighborhoods. Black and white children played sports together, worked on class projects together, and gained a perspective on the world that stayed with them throughout their adult lives. They went on to become journalists, lawyers, businessmen, smart and engaged members of their communities. Today, West Charlotte is one of the district’s most troubled schools. Its student population is 85 percent black and 86 percent of the kids are considered “economically disadvantaged.”

White is one of many alumni who are upset by this situation and have been responding with an outpouring of posts on Facebook and Twitter. Here’s a sampling of what they’ve been saying.

I have to forgive you Charlotte, NC. I want to forgive you, but it will be very hard to forgive you. I owe a little bit of everything that is good in me to West Charlotte Senior High School — what I allude to dating back to before I was even born.

You see, I was the third generation in my family to attend. Every friend that I made, lesson I learned, game that we won affected me more deeply than if I had been anywhere other than at West Charlotte. I read this and I feel like I've let down people I love. I sit here, my day interrupted, real tears streaming down my face, ashamed and disturbed to learn that a place that I owe so much to has been let down by me, so many others who I believe in, and by the city that has benefited so much from it. But Charlotte, you in particular are most accountable for what has happened at West Charlotte – so easily turning your back on what got you to where you are today.

I'm so disappointed in myself and in my birthplace to only now learn of a decision made when I was West Charlotte's senior class president that – in only 15 years – would erase 40 years of progress; 40 years of building a sustainable community – a sustainable future. I am floored to think that no one; no school, city or Mecklenburg county official edgewise, thought to share this with the students and teachers leading West Charlotte at the time. How could you? Was this done intentionally?

Do you feel justified because so many of the people affected had so much to lose – some facing a severely multiplied ill-effect as evidenced in Rab's article? I'd dare any of the deciding judges or any of the attorneys representing the side of this case that reversed what meant so much to me and to my dad before me to stand before the students who were allowed to go out in the world trusting that the city they loved would preserve the school they loved even more. I dare any of you to call me and explain yourself. You're all cowards as far as I'm concerned. …

And anyone who was in the gym that night in 2006 when I spoke in honor of Coach White 's final home game as West Charlotte's varsity men's basketball coach, you know that I warned of this. I warned that if we did not take care of each other, and of our school, that we would lose a vital organ of our community. Did I concede that the community might live on? Sure I did. But now we are only seeing the beginning of what happens when we willfully allow our vitals to reach a point of attrition. However, I had no idea of how stacked against us the deck already was – I didn't know the players and power brokers that had colluded to undermine the call for a community to band together in protection of itself from itself. I didn't understand then, as I hadn't seven years before, that the attack was being launched from the outside. …

I don't know yet what I will do about this. I don't yet know a path to producing an outcome different than the outcomes described in this article, but I do know that I will not sit here and do nothing. I owe so many people and all of Charlotte so much more than that. 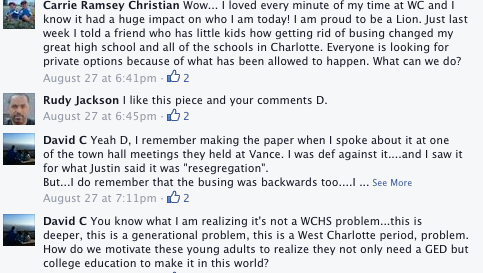 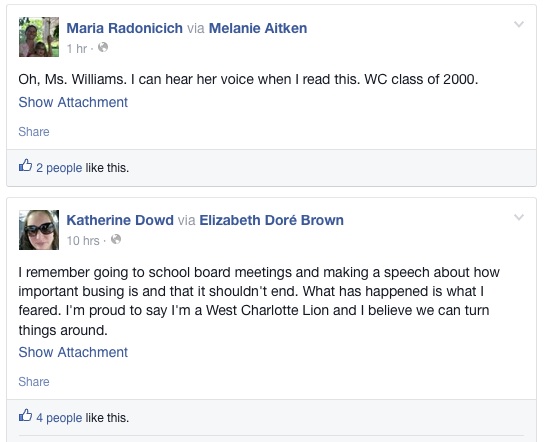