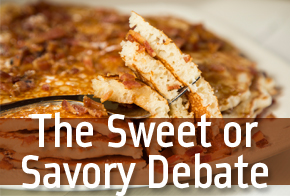 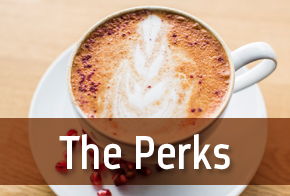 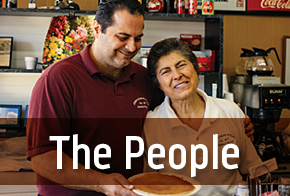 WHETHER YOU SIT DOWN to a pile of bacon and eggs, a beautiful plate of eggs Benedict, or cream cheese and lox on a bagel, breakfast sets the tone for your day. And although often ignored by the more elegant restaurants, it’s due for some appreciation. Here are 43 places to get your morning fix (including a few that serve breakfast any time of day). 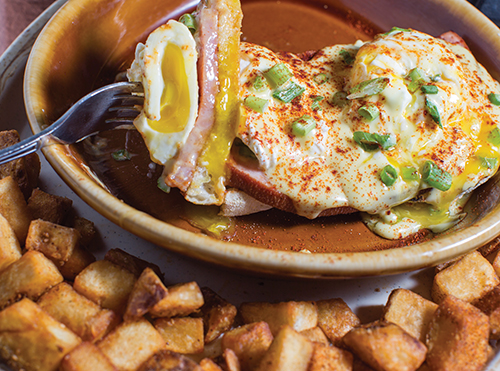 Eggstravaganza
Another Broken Egg Café
A sunny, yellow interior and dried herbs hanging from the ceiling set the tone for the Ballantyne location of this family-friendly, Louisiana-based franchise. Specialties include several renditions of eggs Benedict—a Southern version with black bean cakes and chipotle hollandaise is a must-try. Multiple locations.

A World Away
Café Monte
SouthPark’s Café Monte has the Parisian breakfast down, from the buzz of conversation in the often-crowded bistro to the wafting scent of ham and cheese. Feeling decadent? Try the escargots, served baked in puff pastry with garlic butter. If snails in the morning aren’t your thing, opt for the warm, golden crepes or croque sandwiches. 6700 Fairview Rd., 704-552-1116.

Fresh-Baked Breakfast
Big View Diner
Opened in 2009 by chef and owner Angelo Kaltsounis (who started his culinary career by flipping eggs at Big Village, his father’s first breakfast and lunch place in Charlotte), Big View is much more than a Greek diner. At breakfast time, the scent of pastries and bread greets you at the door. The baked goods are all made in-house, from scratch. It’s a labor of love for pastry chef Frank Kaltsounis and his team, who come in early and stay late at night to prep. 16637 Lancaster Hwy., 704-544-0313. 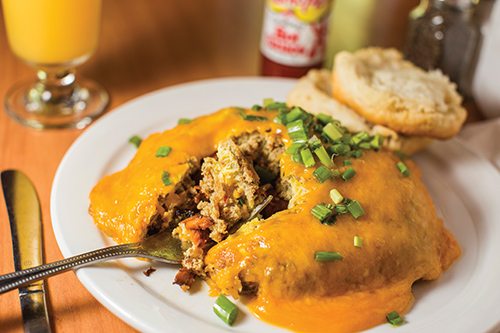 At Zada Janes, the Booker T’s East Side Hasher is a dish of sweet potato hash browns topped with two “happy eggs,” frittata-style, covered with melted cheese and green onions.

Worth the Wait
Zada Jane’s
You might wonder what all the commotion is about when you drive past the corner of Thomas Street and Central Avenue in Plaza Midwood—especially on a weekend morning. Zada Jane’s opened in 2007 with a focus on serving fresh eggs, vegetarian-friendly fare (yes, it has soysage), challah French toast, and some of the best biscuits in town. Outdoor cornhole and shuffleboard—and a self-serve coffee station with an assortment of kitschy mugs—make waiting for a table almost enjoyable. 1601 Central Ave., 704-332-3663. 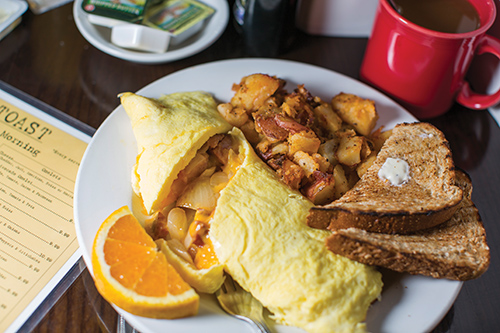 The Neighborhood Choice
Toast Café
This local chain launched in 2005 and has grown to four locations in Davidson, Dilworth, Ballantyne, and Tega Cay. An easy, laid-back atmosphere combined with a menu that offers straightforward breakfast dishes keeps it family-friendly and upscale. Whether you seek a country breakfast (eggs, biscuit, sausage gravy, and country ham) or the casually elegant Cali Benny (a Benedict with poached eggs, avocado, and tomato on an English muffin and topped with hollandaise), there’s something for you here. Multiple locations.

Homespun
Café 100
Located in a charming 1920s bungalow on Huntersville-Concord Road, Café 100 is family-owned, with a menu that draws inspiration from Californian and Southwestern cuisines. Huevos rancheros is a popular breakfast option, but the daily specials are always good: On a recent visit, lemon ricotta pancakes, light, lemony, and served in a stack of three, were a standout. 100 Huntersville-Concord Road, Huntersville, 704-274-5932.

Family Friendly and Fast
Showmar’s
Although this locally owned, Greek-inspired chain has more than 27 locations in the Charlotte area, only 10 of them serve breakfast. They offer the chain’s affordable, no-frills fare, with standards like bacon and eggs, hotcakes, omelets, and waffles. Multiple locations. 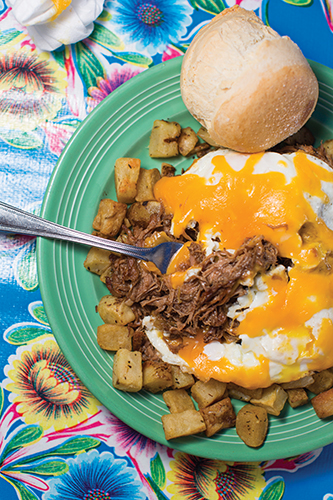 Southern Comfort
Flying Biscuit Café
This eclectic Southern chain opened its first location in Atlanta in 1993, backed by Emily Saliers of the folk duo Indigo Girls. A playful atmosphere makes it popular for casual business meetings and young families alike. But it’s the food—with Southern standards like grits and biscuits along with healthier options such as turkey bacon and veggie-friendly dishes—that keeps both Charlotte locations busy. Two locations. 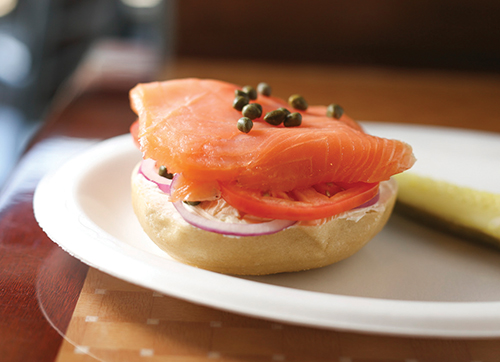 A bagel from Poppy’s topped with lox.

Taste of Home
Poppy’s Bagels and More
On a weekday morning at Poppy’s Bagels and More, a few guys who look golf-ready sit close to college-aged students dressed in what could pass as pajamas. They’re all eating steaming-hot bagel breakfast sandwiches—the kind that New York native Ronnie Rippner and his parents, Leslie (“Poppy”) and Georgeana, couldn’t find when they moved to Charlotte. They opened Poppy’s in 2010, serving New York-style bagels that are made in-house daily, kettle-boiled, and baked for a crackly crust with a soft, chewy interior. Stack fried or scrambled eggs, lox, bacon, or all of the above between your choice of more than a dozen flavors, and add a side of potato pancakes. Then wash it all down with a flavored coffee or hot tea. Muffins, scones, and pastries cater to those with a morning sweet tooth, and savory fans can order make-your-own omelets. 2921 Providence Rd., 704-366-8146. 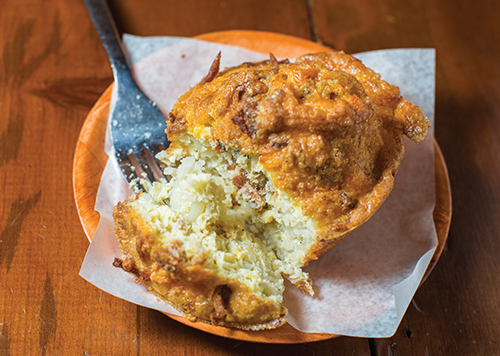 The Mayobird’s clever hash brown cup with bacon and egg.

Straight-Up Southern
The Mayobird
The Mayobird started out as a food truck specializing in chicken salad. But in its new East Boulevard home, the restaurant also offers breakfast. Owner Deedee Mills presents a selection of simple but satisfying small breakfast items, from a popover-like hash-brown cup ($4.25) with bacon, egg, and cheese to a giant, fluffy square of honey-bun coffee cake ($3.75). Many of the dishes are Mills’s family recipes, and everything comes with eco-friendly packaging and utensils. 1531 East Blvd., 980-237-2543. 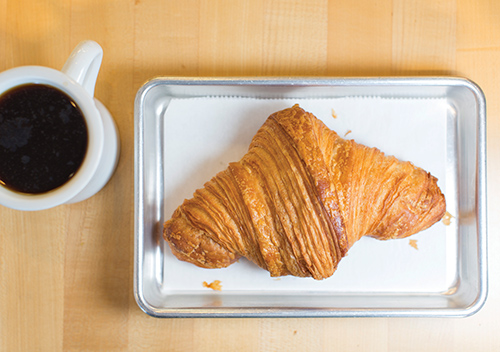 Fresh-Baked Goodness
Sunflour Baking Company
Elegant breads, pastries, biscuits, and more are made in small batches at this Elizabeth bakery and coffee shop. The family-owned eatery creates its organic menu with many local and regional products, such as flour from Lindley Mills in Graham, North Carolina, jams by Hazel’s Jams in the Commonwealth neighborhood, and honey from Elizabeth. Don’t pass on the flaky croissants; executive pastry chef Marion Buhrmaster, who owns the bakery with her mother, Debbie Bartok, and sister, Johannah Saruse, makes them from scratch. The recipe, which starts with a natural wild yeast starter and a three-day fermentation process, took months to perfect. 2001 E. 7th St., 704-900-5268. 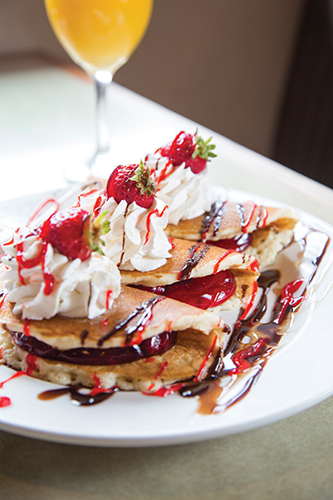 The Classic
Landmark Diner
Breakfast is served all day at Landmark, a diner with a 1980s vibe on the city’s east side. The menu is extensive but not fancy. Expect eggs however you want them, a long list of omelets, plus pancakes, Belgian waffles, and French toast. Landmark has also built a reputation for its house-made cakes, pies, and pastries—a large dessert case, filled to the brim, greets you at the door. (You can order from the case any time of day.) Even if you’re not in the mood for a slice of Chocolate Mousse Layer Cake or Banana Cream Pie with your morning coffee, the case is worth a look—you might get lucky and arrive on a day when the restaurant’s just-sweet-enough, fresh-made cinnamon rolls are available. Whatever you order, you can be sure your coffee mug will never be empty, and there’s a good chance you’ll be called “honey” before you leave. 4429 Central Ave., 704-532-1153.

Trendy and Urban
Fourth Ward Bread Co.
Quirky decor and its location in a former warehouse gives this uptown eatery a trendy vibe. The family-run bakery and café had lines around the block when it opened in 2013 with the city’s only cronut (a cross between a donut and a croissant) on the menu. The cronut is still available, along with savory croissant sandwiches, a rotating selection of pastries, and specialties like enormous hunks of bread pudding. A standout: the egg and cheese breakfast croissant—a French take on an egg-in-a-hole. 312 N. Graham St., 980-218-9672.

The Newbie
LittleSpoon Eatery
Owner Alesha Sin Vanata’s West Coast flair is immediately apparent at LittleSpoon—from the Myers Park eatery’s eclectic music selection to small details like the coffee mugs, which are deep and wide. Although the menu changes frequently, some dishes, like the hot pocket and the pop tart, remain in different incarnations. (If you spot the cinnamon toast brûlée, order it.) For early birds, this is the place to see and be seen—especially on nice days, when the intimate restaurant’s oversized windows are opened, giving the eatery a sophisticated, urban feel. 2820 Selwyn Ave., 704-496-9908.

These three spots are always ready to satisfy a breakfast craving 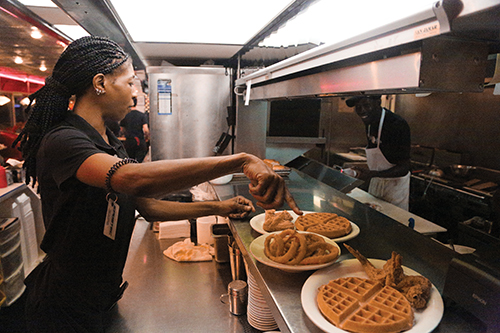 MIDNIGHT DINER
This 1950s-style diner on Carson Street churns out old favorites like biscuits and gravy, but items like decadent coconut crunch French toast are making believers out of breakfast traditionalists. The most popular dish any time of day, according to the staff: chicken and waffles. 115 E. Carson St., 980-207-3641.

MATTIE’S DINER
At this 24-hour joint, dishes have memorable names: “Ya Might Be a Redneck” or “Hunka Hunka Burnin’ Toast.” Feeling adventurous? Try the Jersey sandwich, with egg, ketchup, and Taylor ham (a pork roll made of minced ham, bacon, and bologna), a homage to the diner’s Garden State beginnings. 915 Hamilton St., 704-376-1020.

AMELIE’S FRENCH BAKERY
The singing starts after someone orders a breakfast sandwich. In the back of this all-hours bakery—known for éclairs, croissants, and tarts that are made fresh in-house every day—the stovetop and the sandwich-making station are on opposite sides of the kitchen. Each time someone orders one of those breakfast sandwiches, the freshly cooked egg must be walked across the room. It can be a difficult task, parading an egg on a pan or a spatula or a plate through a busy kitchen, but the solution can sometimes be heard throughout the bakery: If you’re walking with an egg, sing the eatery’s signature “egg song” so everyone can hear (and get out of your way). 2424 N. Davidson St., 704-376-1781.

Slathered with butter, drowned in gravy, or eaten plain and hot, the biscuit is a Southern breakfast staple. Don’t miss these three standouts. —S.N. 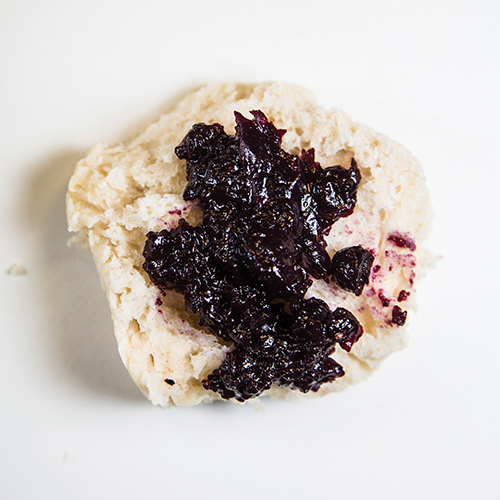 Tupelo Honey Café
A touch of sour cream leaves this biscuit tender and fluffy; it’s as
satisfying as a slice of pie with a spread of the restaurant’s
blueberry compote. 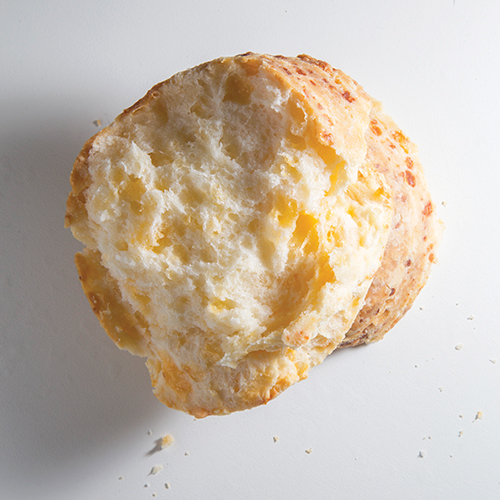 The King’s Kitchen
Flaky and light, these biscuits are made for soaking up gravy or holding a slice of bacon. 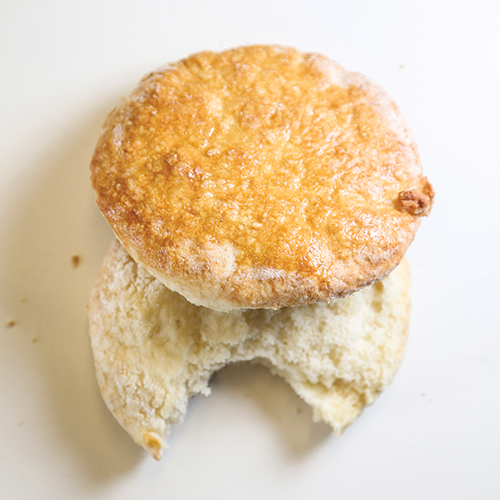 This article appears in the October 2014 issue of Charlotte magazine.
Categories: Feature, The Buzz
Contest of the Month