Sarah is off galavanting in London, which means it was nearly impossible for me to log into Shop Talk this morning, as I am quite literally blind with jealous rage. However, then I remembered that because Sarah is gone, I get to have sole control over the rating/loving/hating of last night’s Emmy fashion, without Sarah jumping in to defend some bohemian nightmare. So, without further adieu, here are Jenn’s picks for the best and worst of last night’s Emmy’s. Think I got it wrong? Tell me in the comments!

The White Dress:
There were a TON of white dresses on the red carpet last night, and I am almost ambivalent about who ends up in which category because I feel differently about them all each time I click. But for the moment, here’s where I landed.
Best: Mariska Hargitay (classic, lovely, luminous) 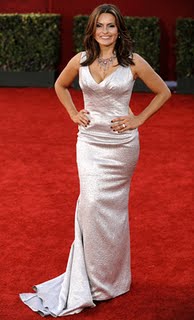 The Blue Dress:
Best: Julia Louis Dreyfus (who I think gets hotter every year) and Christina Hendricks (who looks a little awkward when she’s smiling, but has curves that kill and skin to kill for).
Worst: Sarah Silverman – I think the photo below speaks for itself. With honorable “Worst” mention going to Christina Applegate. I just didn’t dig this gown. Can we be over mesh panels around the middle already? Also I am anti-one shoulder gowns.

The Black Dress:
Best: Tie between Jenna Fischer (who normally falters come Red Carpet time), and Heidi Klum (who manages to look like 2 million bucks at 9 months preggo. Un-frakking-fair.)
Worst: Tina Fey
After last year’s fabulous cleavage-framing frock, this black dress just seemed a little… sedate. Tina still looks lovely, but the dress looks like it belongs on the wife of some larger male star, not on the funniest female alive. Click here for a second look at this lackluster gown. To be fair to Tina, I actually hated this dress more but my level of disappointment was higher with Tina. I expected more from her.

The Metallic/Sparkly Dress:
This was a toughy. There were a number of metallic frocks on the red carpet last night and I didn’t lurve any of them. Mostly I think they all look painful and scale-y, or just plain boring. I actually had to open the category up to “sparkly” and metallic so that I could actually get behind a dress for the “Best” title.
Best: Definitely more sparkly than metallic, I loved this dream-like dress on Rose Byrne. As for actual metallic, I guess I’d have to go with Kelly Cuoco’s gold column.

Worst: The rest of them. Including this one (A belt? Really, Sandra?), this one (tired of this drapey look, Jamie Lynn) and this one (ouch! looks like it could cut me!)
The Red Dress:
Best: Let me be clear, I thought Blake Lively’s big fat braid down her back was outright INSANE, but her boobs in this red dress were a sight to behold. And, if you are gonna wear red, WEAR RED. She did.

Worst: This just makes me feel even better that I stopped watching Heroes after the first season. Hayden Panettiere, thumbs down. I will not be saving this cheerleader.
The Chin Up Award:
Not as in, “Chin up, sweetie, you look fabulous!” but as in “From the chin up you looked great. The rest was just regrettable.” This award goes to J. Love-Hew, whose face and hair looked lovely, but whose dress looked like Jessica McClintock 2001.

Honorable mention for the Chin Up Award goes to Kyra Sedgwick. You are too old to be wearing that much pink, even if you are still bright eyed and beautiful.
The Wasted Potential Award:
I have a deep, unending love for all things West Wing, and therefor I was really pulling for Zoey Bartlett a.k.a. Elizabeth Moss. I like the concept of the neutral dress with the bold necklace, and I was even okay with it being one shoulder, but…. this just didn’t work. It wrinkled, the across the chest sash piece looks awkward, the necklace didn’t sparkle enough, and the color wasn’t quite right with her skin and hair. This had the potential to be a knock out… instead it was just “meh”.

The WTF Award:
Here’s something you should know about me: I lived in LA for a year, and saw my fair share of celebrities at awards shows and premieres as part of my job…. but I reserve a special fondness for the stars that I saw just “out and about”, and not at an official industry function. I am, therefor, fond of Mila Kunis, because I shared an elevator ride with her once, coming up from a parking deck. I also loved the movie Forgetting Sarah Marshall, in which she is gorgeous and loveable. I just wanted you to know all of that before I completely diss her for wearing this ridiculous dress and giving sour puss faces to the camera like she is Wednesday Addams or something. Mila, love you, mean it, but this is a definite “WTF” award winner.