Where Are They Now?: Kevin Geddings 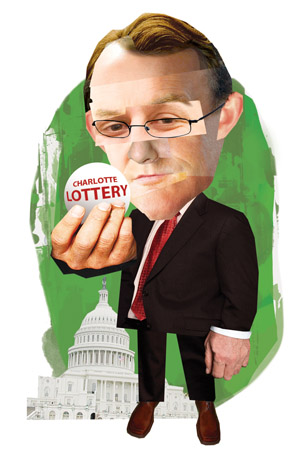 By the time Kevin Geddings arrived in Charlotte, he was already a man on the rise. The Wofford grad had made his name as a politico four years earlier in helping Jim Hodges win the 1998 South Carolina governor's race, then established a successful public relations firm. He quickly became a key figure in the Mecklenburg County Democratic Party and even considered running for mayor before getting himself appointed to the new state lottery commission in 2005. That's when he went bust.

Geddings failed to disclose the $250,000 he received from one of the gaming machine companies bidding for the lottery contract. Then he refused to own up to his mistake, insisting he'd just been careless about his public disclosure forms. That earned him a perjury conviction and the ire of prosecutors and maybe even the judge -who added an extra seven months to Gedding's sentence, a $25,000 fine and forty-eight months in federal prison.

Geddings, who declined an interview request, moved his family to Florida after the scandal broke. He's being held at the Federal Corrections Institute in Jesup, Georgia, and will be released on Christmas Eve.

UPDATE (Appended July 29): By the time this article hit newsstands in mid-July, Kevin Geddings was already a free man. He’d been released early from federal prison on June 30.

After he was accused of failing to disclose money he’d received from a lottery contractor, Geddings had been convicted on five counts of honest services mail fraud.

As the Raleigh News & Observer reported on the day of his release:

“Geddings had argued that the honest services statute didn’t cover conflicts of interest, but that a bribe or kickback had to be shown for the law to be violated. That’s exactly what the justices decided in a different case last week, prompting an immediate review of Geddings’ conviction.”

The U.S. Supreme Court had already declined to hear Geddings’ appeal. In light of the new decision, however, a federal judge had Geddings released right away. Geddings’ lawyer is now working to have his conviction vacated.