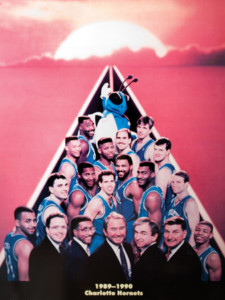 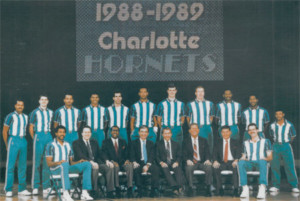 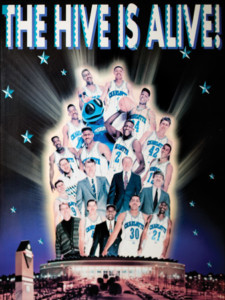 North Carolina was known as a basketball state. More precisely, a college basketball state. But in 1985, Kannapolis businessman George Shinn believed he could bring professional hoops to Charlotte. It was a long shot, but with an alliance of local powerhouse entrepreneurs including Rick Hendrick and Felix Sabates, he felt he could convince the NBA that Charlotte was ready.

"When we went to Phoenix for the NBA meeting [in 1987], there was an article in the Phoenix paper — the headline actually said, ‘The only franchise Charlotte, North Carolina, was going to get was the golden arches,' " Sabates says.  "And by God, a week later we had a franchise, so we made those people eat their words."

With the 24,000-seat Charlotte Coliseum, originally intended to attract major college basketball tournaments, the city had a new home court for its NBA team. When the Charlotte Hornets took the floor at "The Hive" in 1988, not only did the team sell out the first home game (the black-tie-clad audience gave the team a standing ovation after a blowout loss), but the team went on to 358 consecutive sellouts, leading the league in attendance during its first seven seasons.

"It was a lot of fun," Sabates says. "The team wasn't very good in the beginning, but it was very lively. People would come to the games knowing that we didn't have a verygood chance of winning, but it was entertainment." —Jarvis Holliday

#1 Tyrone "Muggsy" Bogues, Guard
At five-foot-three, he's the shortest player ever to play in the NBA, but he became a giant in this city. An expansion draft pick, Bogues played ten seasons here, then spent four seasons with the Golden State Warriors and Toronto Raptors before retiring in 2001. He returned to Queen City basketball when he was named head coach of the WNBA's Charlotte Sting during the final month of the 2005 season. He also coached the Sting in 2006, before the franchise folded at the end of that year. Bogues lives in Charlotte and keeps busy holding basketball camps and clinics as well as making speaking appearances.

#3 Rex Chapman, Guard
After starring for the Kentucky Wildcats, Chapman became the Hornets' first-ever draft pick. As a good scorer and even better dunker, he dazzled the home crowds before being traded to the Washington Bullets after three and a half seasons. Since retiring from the Phoenix Suns in 2000, he's worked as a TV commentator and held front-office roles with NBA teams. He's served as vice president of player personnel for the Denver Nuggets since 2006.

#25 Earl Cureton, Forward
A ten-year veteran by the time he came to the Hornets, Earl "The Twirl" provided leadership to the first-year team. He played in all eighty-two games that season, starting half, his only season with the Hornets. He lives in his native Detroit and often serves as a commentator for area sports coverage, and last year he was as an assistant coach for the Detroit Shock in the WNBA.

#30 Dell Curry, Guard
Curry spent ten seasons with the team and was one of the game's greatest three-point shooters. But basketball fans today probably know him best as the father of Stephen (the Davidson College star now excelling in the NBA for Golden State) and Seth (about to play his first season for the Duke Blue Devils). He's a TV analyst for the Charlotte Bobcats and works with charitable organizations such as Athletes United for Youth.

#14 Rickey Green, Guard
After spending only half of the 198889 season with the Hornets, he was traded to the Milwaukee Bucks, then played three more years for three different teams, finishing his career in 1992 with the Boston Celtics. In 2004, he played in a campaign fundraising basketball game with then-Senator Barack Obama in his hometown of Chicago. For the past twelve years he's worked for the Forest Preserve District of Cook County (Illinois) and he is currently an assistant superintendent in the recreation department.

#6 Mike Holton, Guard
He ended his six-year NBA career in 1990, with the last two seasons in Charlotte. After spending much of the 1990s as an assistant college basketball coach, he was head coach of the University of Portland from 2001 to 2006. He owns an insurance firm and is a TV studio analyst for the Portland Trail Blazers.

#42 Dave Hoppen, Center
At six-feet-eleven-inches tall, Hoppen was a solid backup center for the Hornets for two and a half seasons. He runs a financial management firm in Omaha, Nebraska, his hometown.

#41 Tim Kempton, Forward/Center
Among the nine NBA teams he played for, "Special K" had two one-year stints with the Hornets (1988 and 1993). For the past six years, he's worked as a Phoenix Suns radio analyst.

#11 Ralph Lewis, Guard
He played limited minutes in fewer than two seasons for the Hornets, and had just a three-year playing career in the NBA. He fared better as an assistant coach for the Seattle SuperSonics/Oklahoma City Thunder from 2005 to 2009.

#35 Sidney Lowe, Guard
Most fans might not remember Lowe's professional basketball days, since he split time between the CBA and NBA, including part of the 1988-89 season with the Hornets. Since 2006, he's been head coach at N.C. State, where he won the 1983 national championship as a player under coach Jim Valvano.

#31 Kurt Rambis, Forward
He was the best-known player on the original Hornets, having spent the previous seven years as part of the Lakers dynasty. He excelled in his first season here, posting career-high averages in points and rebounds, before being traded midway through the following season. No longer wearing his trademark large, black rimmed glasses, Rambis is head coach of the Minnesota Timberwolves.

#50 Robert Reid, Forward
A ten-year veteran with the Houston Rockets when he came to Charlotte, Reid was one of the Hornets' top scorers. Traded the following season, his career ended in 1991 with Philadelphia. He settled in Houston and spent a few years working as a teacher. Most recently, he's been hosting basketball clinics, often in countries including China and India.

#45 Brian Rowsom, Forward
The time he spent in Charlotte represented the bulk of his three-year NBA career before playing several seasons overseas. Rowsom is head coach of the Oita Heat Devils in the Japan League.

#23 Tom Tolbert, Forward/Center
Tolbert started and finished his NBA career in Charlotte. He was drafted by the team in 1988 and played here for one season, then spent the next five seasons with three different teams before returning to the Hornets in 1994. For the past decade and a half he's been a popular sports broadcaster for KNBR in San Francisco.

#7 Kelly Tripucka, Forward
The curly-haired Tripucka averaged 22 points per game during the 1988-89 season. He played two more seasons here before retiring. He's a TV analyst for the New York Knicks.

Dick Harter, Head Coach
With a successful college coaching career under his belt, Harter tried his hand in the NBA in the early 1980s. After a couple of assistant coaching gigs, he became the Hornets' first head coach. When the Hornets started the first half of their second season with an 8-33 record, Harter was fired. He's since worked on several NBA coaching staffs and is currently an assistant with the Indiana Pacers.