Where to Go To Private School

With great private schools all over the city, choosing the right one for you and your child can be difficult. After all, you have to think about location, reputation, and, of course, tuition. So we researched the programs at private schools around town and found the ones that offer outstanding student experiences in five areas and then we took a look at high school locations and annual tuitions—all to make your your search just a little bit easier.

With a tuition several thousand dollars less than many of Charlotte's prominent private schools, Davidson Day still offers one of the lowest student-to-faculty ratios in the region (7-to-1). This past year, 28 percent of students received some type of financial aid, and parents also don't have to worry about students having plenty of college prep—DDS offers eight AP courses and students boast an average SAT score between 1450 and 1770. 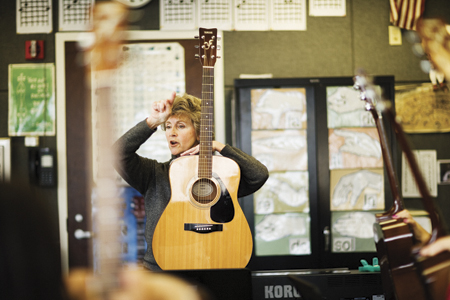 At Charlotte Country Day, upperschool students have access to some very cool fine-arts facilities — a blackbox theater, a dance studio, a painting room, and a dark room, to name a few. But the lower-school students have it made, too, with two separate visual arts spaces for pupils in junior kindergarten through fourth grade, as well as a ceramics studio, and a drama teacher who creates specialized plays (with original songs) for each class.

It's no wonder the Charlotte Latin Hawks spark fear on athletic fields across the region: the school earned four North Carolina Independent Schools Athletic Association state championship titles in fall 2010 alone, and the girl's soccer team was ranked number one in the nation by the National Soccer Coaches Association of America. Plus, 90 percent of students in grades seven through twelve participate in at least one sport, and the school just earned its sixth-consecutive Wachovia Cup—reserved for one high school in North Carolina for overall athletic excellence.

Technology education goes way past email and a couple (admittedly well-equipped) computer labs at Providence Day. With faculty using blogs, Skype, and Twitter to enhance the curriculum, students are encouraged to push the technological envelope themselves. Last year, students in the upper school's environmental club raised money for a rooftop solar grid that would allow the campus to use rechargeable batteries; they even created a solar-powered charging station for personal electronic devices.

It's admittedly subjective, but great religious education uses faith to create community both on and off campus. At Trinity Episcopal, all students meet for chapel on Friday mornings, which often include guest speakers. They also take faith education courses, which include annual community service activities: third-graders volunteer at Urban Ministry Center, and eighthgraders travel to D.C. to meet with U.S. representatives and discuss social and political issues.