Why Go to Private School 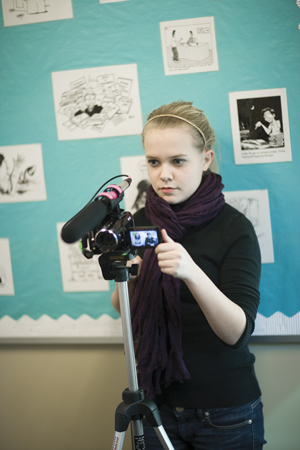 Besides the promise of exceptional teaching and motivated peers, private schools can offer students once-in-a-lifetime experiences. After checking out the classes and extracurricular activities at schools across Charlotte, we found a few eyebrow-raising programs that make it clear why private schools earn the rep (and tuition dollars) that they do.

With headlines blazing through airwaves at top speed these days, it's more important than ever for budding journalists to learn how to navigate the fast-paced media world. In Charlotte Christian's broadcasting class, instructor Chad Fair teaches upper-school students the foundations of reporting and writing news stories, and encourages students to cultivate the ever-valuable broadcast personality. Students also learn the basics behind producing short films, commercials, and news segments. With their investigative skills and technical know-how, the broadcasting class airs the news every Friday on a student-produced show that covers campus events, sports, and activities. The Knight Knews newscasters aired twenty-seven programs last year, one of which earned an award from Schooltube.com, and were among the first press members to film inside the NASCAR Hall of Fame.

Charlotte Latin students don't have to wait until college to study abroad (and their parents don't have to worry about unsupervised antics across Europe). With eight sister schools across the globe, many upper-school students study abroad at Charlotte Latin. At least one faculty member accompanies student groups on twoto three-week summertime trips, when students can visit the world-renowned Malba Museum in Marin, Argentina, visit villages in South Africa, and even see the castle in Watburg, Germany, where Martin Luther once lived. Students from Latin's sister schools also attend Latin for several weeks and stay with local families, often getting their first exposure to American culture.

At Davidson Day, students aren't the only ones to reap the benefits of an independent curriculum. For one week between trimesters, each faculty member (administration included) is required to teach a course in a subject of their choice — and students in the middle and upper schools spend the week exploring totally unconventional subjects. This past mini term, the school's marketing director, a certified yoga teacher, taught students the basics of yoga, while the photography teacher, a former advertising executive, taught a "Think Tank" class, which explored marketing techniques and problemsolving skills. Some instructors even use the opportunity to get off campus: a French teacher took her classes on mountain bike rides through local parks and trails. 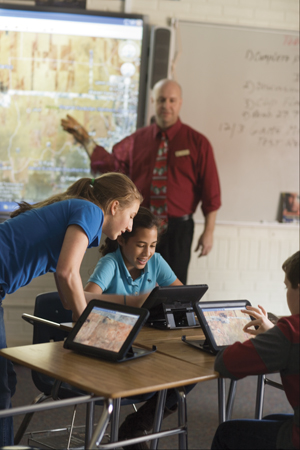 Charlotte Country Day is the only private school in Charlotte with a team of on-site detectives to sort out campus shenanigans. After spending the year learning about the human body, seventh-grade science students participate in a threeto four-week CSI Project. They spend a week in detective school learning about blood types, fingerprint analysis, and how to identify fiber samples under a microscope. Teachers then stage a surprise crime somewhere on campus — anything from a serial squirrel murderer (using chalk outlines of squirrel bodies) to a missing piece of equipment. Students investigate the scene and split into groups to deduce whodunit with their new forensic skills. At the end of the unit, the student group with the most thorough and accurate detective's report announces the verdict during a middle school assembly, and a real, live Charlotte Mecklenburg police officer arrests the culprit and escorts him off the premises.

Just a few months after bleary-eyed Mac fanatics lined up outside the Apple Store during the wee hours to wait for the iPad release, middle schoolers at the Cannon School showed up for class one day with stacks of shiny, new iPads waiting for them. Students from grades two to four use them for nearly all of their classes, employing apps for diagramming sentences, exploring online atlases, and consulting interactive periodic tables. They're particularly useful in science courses: students can take them on outdoor lab excursions to identify and learn about plants or insects. And that yucky smell that comes along with a frog dissection? Using a frog dissection app, students can cut open the digital critter, see its entrails, pull out and look at its organs, and never once have to inhale formaldehyde.

While many people rang in the new year with expensive gym memberships and newage nutrition books the size of phonebooks, lowerschool students who attend Providence Day School's afterschool Extended Day program have been working the basics of nutrition and exercise into their daily routines since September. "Get Fit, Charger Fit," now a staple of students' after-school time, emphasizes exercise and healthful eating habits with some pretty enviable methods: each Monday, the Nutty Nutritionist (a registered dietician) gives visual, interactive presentations on choosing the right foods and healthful eating habits, meaning lots of playing with food. Plus, on Fridays, the school invites fitness instructors to give introductory, childfriendly classes on everything from Zumba to kickboxing to yoga. 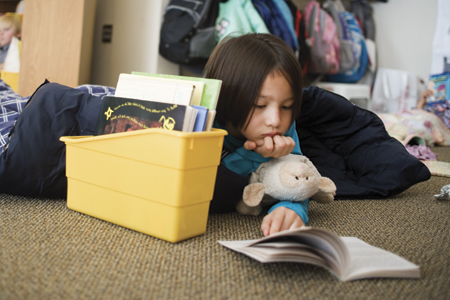 Most of us fantasized about the day our teachers would let us wander into class in flannel pajamas. Several times a year, Trinity Episcopal makes that fantasy a reality with Camp Read-a-Lot, when secondand fourth-grade students are allowed to come to class with sleeping bags, pillows, pajamas, and, of course, a stack of books. Students (and teachers) spend the day reading, breaking only for lunch, recess, and special courses like art or music. Camp Reada-Lot is part of the Reader's Workshop Curriculum, which helps students find books that match their reading levels. Now that's a reason to get out of bed in the morning.