Witness for the Defense: National Journal Breaks Down Clinton Speech 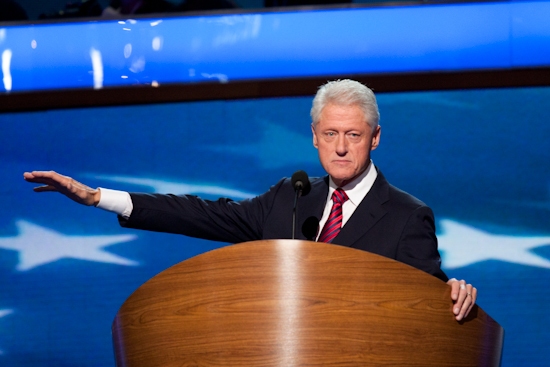 By summoning Bill Clinton as a character witness on Wednesday night, Barack Obama turned to a predecessor he once derided as more transactional than transformational.

When Obama joined his predecessor on the stage at the end of his speech, it was a moment of inverted political fortunes: After criticizing Clinton’s approach to the presidency during his triumphant first march to the White House, Obama hoped to buttress his fiercely contested bid for reelection by aligning with his predecessor’s record of economic growth and centrist reform.

While forceful, Clinton’s much-anticipated speech wasn’t especially eloquent; in its point-by-point defense of Obama’s record on everything from health care and welfare to job growth and fuel-economy standards, it was reminiscent of one of Clinton’s elongated State of the Union addresses. (It borrowed from those predecessors as well by barreling past the 11 p.m. cutoff for network coverage.) Along the way, Clinton subtly sought to recast Obama in his own image by portraying him as more conciliatory and inclusive than a Republican Party that he portrayed as ideological and uncompromising.

“One of the main reasons we ought to reelect President Obama,” Clinton insisted, “is he is still committed to constructive cooperation.”

Clinton’s cleverest rhetorical device was to pull back the lens from the past four years to argue that over the past five decades the economy had produced far more jobs under Democratic than Republican presidents. With that reframing, he sought to present the race less as a choice between two individuals than two competing traditions—and to link Obama to robust job growth under his own presidency in the 1990s and the Kennedy and Johnson years during the 1960s.

Clinton’s speech brought some order to a grab bag of an evening featuring a cavalcade of constituencies, from labor leaders to abortion-rights supporters, veterans, assorted governors, female senators, and business leaders. Until Clinton’s culminating remarks, the convention’s second of three nights seemed like the lagging middle film in a movie trilogy: It drifted without approaching the concentrated emotional power of the Monday speeches from Julian Castro, Michelle Obama, and even labor activist Lilly Ledbetter.

Yet the contrast between Clinton and the evening’s other headliner, Elizabeth Warren, the Massachusetts Senate candidate and liberal heroine, was telling. Warren thundered through a populist jeremiad that borrowed more from William Jennings Bryan than William Jefferson Clinton.

In her unflinching and unrelenting denunciations of the wealthy and corporations benefiting from an economic system she denounced as “rigged” against average Americans, Warren underscored how far the Democrats have traveled from Clinton’s more conciliatory message of opportunity, responsibility, and community in the 12 years since he left office. Indeed, immediately after she left the stage, Clinton repeatedly called for cooperation between government and the businesses that Warren had portrayed as maneuvering tirelessly for advantage at the expense of ordinary Americans.

Obama has conducted his presidency somewhere on the continuum between Clinton and Warren. He hasn’t been as unqualified in his confrontational populism as the latter, but neither has he shown as much willingness to challenge his party or rethink traditional liberal approaches as Clinton did. That was one of several reasons  that Obama’s decision to provide Clinton such a prominent role in his defense was so striking.

Throughout his rise from local Chicago politics to the White House, Obama, in fact, displayed an uneasy relationship with the centrist New Democrat movement that Clinton led. As Ryan Lizza noted in his New Yorker profile of the relationship between the two men this week, Obama, as a young lawyer in 1996, criticized one of Clinton’s signature New Democrat achievements, the welfare-reform legislation that the president signed over resistance from much of his party’s Left.

A few years later, Obama initially consented to being included on a list of 100 rising party stars chosen by the centrist Democratic Leadership Council, the group that provided the intellectual (and some organizational) foundation for Clinton’s effort to rethink the party agenda. But later, as conflict intensified between the DLC and a revived grassroots energized by the partisan collisions of the George W. Bush years, Obama asked to be removed from the list, according to one official familiar with the discussions.

When Obama ran against Hillary Rodham Clinton for the Democratic nomination in 2008, he broadened his critique of Bill Clinton’s approach to the presidency. In a January 2008 interview with the Reno Gazette-Journal, Obama unfavorably compared Clinton’s impact on the country with Ronald Reagan’s. “I think Ronald Reagan changed the trajectory of America in a way that Richard Nixon did not and in a way that Bill Clinton did not,” Obama memorably insisted. “He put us on a fundamentally different path because the country was ready for it.”

That criticism may have been partly an effort to appeal to liberal voters that Obama hoped to consolidate against Hillary Rodham Clinton. But it also reflected a deeper conviction in the Obama camp that Clinton had failed to change the parameters of the possible that Reagan had established. In an early 2009 interview, David Axelrod, the president’s senior political adviser, said that the White House believed the financial crash of 2008 had discredited Reagan’s government-is-the-problem philosophy in a way that had not been true during the Clinton years.

The result, Axelrod argued, was that Obama possessed much more latitude than Bill Clinton to advance programs that expand government’s role. “There’s a cyclical nature to American politics, and there are epochs,” Axelrod told me at the time. “And in 1980, the New Deal-Great Society epoch came to end, and it launched another [conservative] era that I think history will say lasted 28 years.” While the Dwight Eisenhower and Richard Nixon presidencies were “wedged into” the New Deal epoch, and Clinton’s into the conservative era, Axelrod continued, each were constrained by the “governing theory” set by Roosevelt and Reagan, respectively.

Obama operated on that belief by pushing more aggressively than Clinton to expand Washington’s role in confronting an array of problems while placing less emphasis than his predecessor on balancing such activism with highly visible government reform, like Clinton’s welfare plan. The two men diverged even in their response to landslide repudiations during their first midterm elections. While forcefully resisting Republican budget ideas, Clinton moved in other ways to the center (through a policy known as “triangulation” that Obama criticized in 2008). Obama also began in that direction, but after the breakdown of budget negotiations during the debt-ceiling standoff in 2011, he reversed course toward confrontation and defining sharper differences with Republicans—the approach that still characterizes his campaign today.

Romney has tried to exploit these differences by accusing Obama of reverting to a pre-Clinton traditional liberalism, just as George W. Bush did against Al Gore in 2000. “President Clinton said the era of big government was over,” Romney declared this May. “President Obama brought it back with a vengeance.” More recently, Romney has accused Obama of undermining Clinton’s welfare-reform law.

Clinton sought to rebut all of those charges as he worked through his extended defense of Obama. Yet the fact that Obama, to counter those accusations, sought to benefit from his predecessor’s credibility with independent and centrist voters, suggests that he if wins another term, he still might have something to learn from Clinton’s determination to pursue traditional liberal aims with means infused by historic conservative priorities like personal responsibility and fiscal restraint.

Ronald Brownstein is editorial director of National Journal, where this article first appeared.