Is it just us, or does it seem like September was a particularly crazy month to live in Charlotte? Oh sure, we understand that when one lives in a burgeoning metropolis such as ours, there are going to be days when one must shrug one's shoulders and say: that's life in the big city. But there were a lot of those days in September 2008, and looking back, we count only one day when we truly felt world class. And we're not used to that. 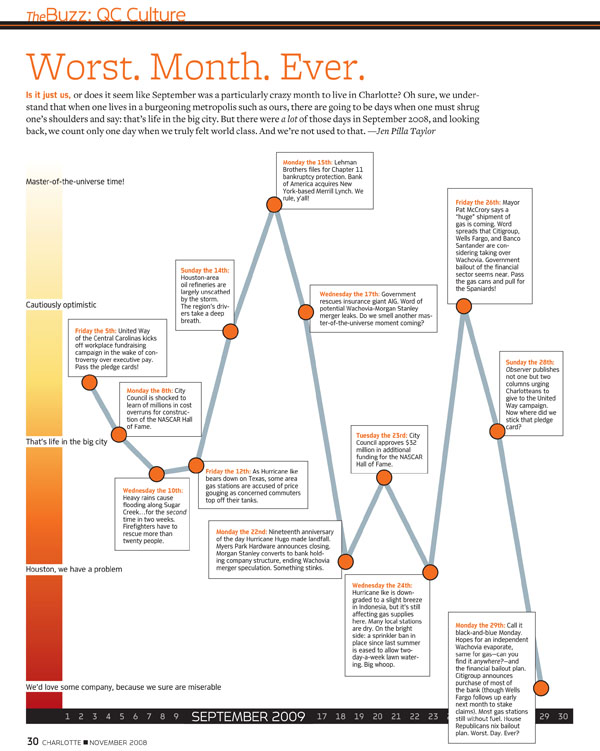 Friday the 5th: United Way of the Central Carolinas kicks off workplace fundraising campaign in the wake of controversy over executive pay. Pass the pledge cards

Monday the 8th: City Council is shocked to learn of millions in cost overruns for construction of the NASCAR Hall of Fame
Wednesday the 10th: Heavy rains cause flooding along Sugar Creek…for the second time in two weeks. Firefighters have to rescue more than twenty people.

Friday the 12th: As Hurricane Ike bears down on Texas, some area gas stations are accused of price gouging as concerned commuters top off their tanks.

Sunday the 14th: Houston-area oil refineries are largely unscathed by the storm. The region's drivers take a deep breath.

Tuesday the 23rd: City Council approves $32 million in additional funding for the NASCAR Hall of Fame.

Wednesday the 24th: Hurricane Ike is downgraded to a slight breeze in Indonesia, but it's still affecting gas supplies here. Many local stations are dry. On the bright side: a sprinkler ban in place since last summer is eased to allow two-day-a-week lawn watering. Big whoop.

Friday the 26th: Mayor Pat McCrory says a "huge" shipment of gas is coming. Word spreads that Citigroup, Wells Fargo, and Banco Santander are considering taking over Wachovia. Government bailout of the financial sector seems near. Pass the gas cans and pull for the Spaniards!

Sunday the 28th: Observer publishes not one but two columns urging Charlotteans to give to the United Way campaign. Now where did we stick that pledge card?

Monday the 29th: Call it black-and-blue Monday. Hopes for an independent Wachovia evaporate, same for gas—can you find it anywhere?—and the financial bailout plan. Citigroup announces purchase of most of the bank (though Wells Fargo follows up early next month to stake claims). Most gas stations still without fuel. House Republicans nix bailout plan. Worst. Day. Ever? We'd love some company, because we sure are miserable

This article appears in the October 2008 issue of Charlotte magazine.
Categories: Buzz > QC Culture, Feature, The Buzz
Contest of the Month