Where you least expect it, people are raising chickens 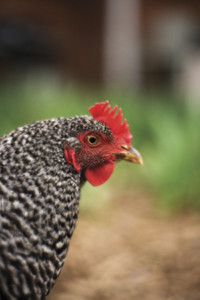 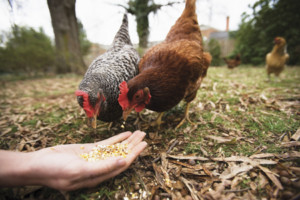 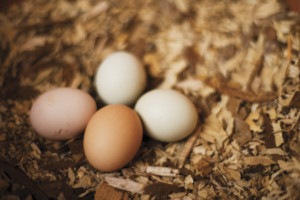 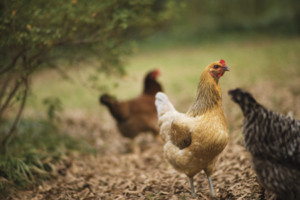 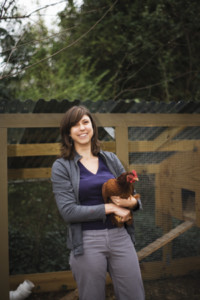 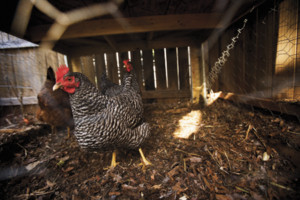 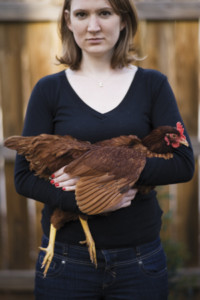 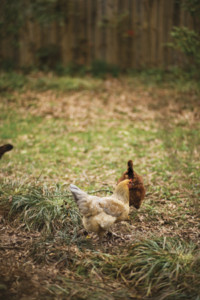 "I’ve always wanted chIckens," recounts Laura Burton, thirty-one, gazing out a window onto the fenced-in backyard of her Medford Acres home, just off Central Avenue. Four hens bop into and out of view as they wander the yard, scratching at the turf for bugs and worms and tender bits of plant. Their presence is unexpectedly soothing.

"I wanted a farm," she continues. "I also wanted a goat." Like the farm, that was a dream unlikely to be realized, given the realities of her lifestyle. "When I got married, chickens made sense." An e-mail announcing that chicks would be on hand at the Charlotte Tailgate Farmers Market set her in motion.

Bring up the subject of raising chickens and you’ll often hear a personal recollection in response. Grandparents kept them. An aunt and uncle had a coop beside their garage. Someone helped with a family flock as a child. People may have warm recollections, but their stories are all set firmly in the past or in faraway rural locales. But chicken keeping is on the rise among a population of educated, economically secure, and socially aware urban and suburban homeowners. Coops housing three or four gently clucking fowl are popping up in neighborhoods where you might least expect them.

So you want to raise chickens? Here are some things to consider when starting out:

Breeds: Varieties differ in plumage, size, lifespan, noisiness, egg color and size, and broodiness (how fussy they are about protecting the eggs they lay). Good basic starter breeds include Rhode Island Reds and Barred Rocks. Housing Chicks are tiny at first, but eventually full-size hens require a coop, plus grazing space. Order online, buy locally, or build your own. Charlotte regulations require a minimum of four square feet of coop and yard space per bird.

Your neighbors Knock on doors, say "hi," and tell them what you have in mind. The city permit process requires this, and it may help avoid hassles later as chickens become more audible, inevitably go roaming, or otherwise make their presence known. Predators Raccoons, possums, hawks, and owls can all be trouble for chickens. Coops and chicken-yard construction are best when well constructed and tightly enclosed with chicken wire.

Although they only recently came to know one another, Gretchen Caldwell lives in the same neighborhood as Burton. "I wanted chickens for a long time," admits Caldwell, forty-seven. She traces her interest to fond memories of her great- grandfather, who looked after a flock of hens in his retirement. Last summer she decided to act. "I got three little Barred Rocks from Renfrow’s" — Barred Rocks are a breed of chicken and Renfrow’s is a Matthews hardware store — "and, without a garage, I raised them in a tub on a table in the living room."

Twenty-eight-year-old Cosby Harmon headed to the same farmers market as Burton, determined to return home with a chick. By the end of the day, she was the proud owner of three tiny, strawberry- colored Rhode Island Reds. "They were wobbly, falling over—adorable!" The puffs of fuzz do well in the sort of small, enclosed space provided by a plastic storage tub, a cardboard box, or, in Harmon’s case, a guinea pig cage. They’re easy to keep clean in the beginning. But they grow quickly. Henhouse plans and much else related to raising backyard chickens can be found at Web sites such as UrbanChickens.org and BackYardChickens.com. All three Charlotte women built their own coops with the help of friends. Each is unique and a source of pride. Coops can also be purchased, but the do-it-yourself, casually anti-corporate strain common to many backyard chicken farmers tends toward one-of-a-kind coops.

Charlotte ordinances limit the number of birds that can be kept to one per four square feet of yard space, and they must be kept at least twenty-five feet from property lines. But some chicken keepers decide not to get the $40 permit, so it’s hard to say how many backyard coops are in Charlotte.

"My neighbors love them," says Burton of her fowl. People in Harmon’s Cotswold neighborhood are equally as enthusiastic: "The first thing I did was go around and tell everyone," she says. "I didn’t want them to just find out and wonder what the hell I was doing." She says keeping chickens has even led to a deeper sense of community. "Kids would come into the back yard — some of them had never seen a farm animal before. At first they were afraid. Then they wanted to touch them." Then she laughs, "Now I lock my gate, though, because one kid was feeding them marshmallows." And adult neighbors like the gifts of fresh eggs, which are noticeably different from the ones typically found in supermarkets. "The yolks are orange — bright, bright orange," says Harmon. And while with store-bought eggs the white spreads out easily, like a liquid, "with fresh eggs, the white holds its shape."

But Burton and others say it’s not really about the eggs. When she sits on her back steps after a long day, watching the hens poke about on the lawn, listening to the melodic rise and fall of their soft clucking, it’s almost therapeutic. "They come right up to me," she says. Caldwell reports a similar effect. "There’s something when I see those four chickens. When I see them wandering around my yard there’s something that touches me deep within my soul and makes me feel content. It’s like all is right with the world."

This article appears in the May 2010 issue of Charlotte magazine.
Categories: Buzz > Trends, Feature, The Buzz