A Look Inside the Last Showing at the Park Terrace Theater

Trippy carpet, a beloved theater, and lessons about uncool Charlotte

THE CREDITS ROLLED. The lights returned. Yet most of us had a hard time leaving the Park Terrace theater.

Two hours earlier, we trickled into the theater in ones and twos. The choice of film—My Friend Dahmer—kept the occasion from descending into sentiment at first. But on the way out, strangers became friends as we consolidated into a small group for an impromptu wake in the lobby. We took pictures of each other by the concession stand. We said bad things about the company that didn’t renew the theater’s lease without explanation. In a quiet moment, we couldn’t help but overhear two employees upstairs near the projection booth, both sobbing. “It just won’t be the same, you know?” one said. Downstairs, we listened while staring at our shoes. We knew. It wasn’t just another night of movies. It was the last night. The last movie.

More than 4,500 people signed an online petition to save the 53-year-old art house movie theater in Park Road Shopping Center. But that night, just 19 of us were there for its final show. My friend Scott and I were among them. We’d watched so many movies in that theater that it felt less like the theater was closing and more like it was breaking up with us.

Scott and I were the last guests to leave the theater. Outside, a few small groups lingered by the trademark neon sign. We tucked our necks into our coats, pushed our hands into our pockets, and lingered awhile, too.

What makes a landmark a landmark? Why do the closings of some places cause gripes, and others cause mourning? What makes strangers stand together on a cold Sunday night, just to look up at a neon sign one last time?

I RESIST WRITING THIS. When a Charlotte business closes or a building falls, a chorus responds with outcries against change. Half of this town thrives on change; the other half reacts with horror. I’ve lived here for 13 years, which makes me either a newcomer or a longtimer, depending upon whom you ask. I’ve seen this city change around me. Some of that change has been a bummer: increasing traffic and housing costs, namely. But some changes have been exciting: Our social activists are getting louder, our arts groups are getting even better, and our entrepreneurs remain in a perennial state of, “What if?” Charlotte is big enough to create opportunities yet small enough to encourage risk. To have such advantages and not embrace change would be shortsighted.

But change is not an all-or-nothing proposition, and some of these changes have stung. Walking out of Park Terrace was reminiscent of a moment a year prior, when I left The Loose Lugnuts show at the Double Door Inn and turned around for a final look before the wrecking ball would hit the 43-year-old blues venue weeks later. These places achieved the sense of cool that can only be gained by not trying very hard for it, by simply giving people what they want without calling attention to the effort.

Charlotte tries hard to be better, to be cooler. And that spirit does make us better and cooler. Usually. But sometimes ambition is just insecurity with a better spin. When it’s the former, it’s strength mixed with humility; the latter is the stuff of middle school lunch tables. We toe that line carefully here.

The most memorable places are the ones that don’t try to be cool. They’re the places that simply play great movies, serve great food, host great bands: Park Terrace, Sir Ed’s, Brawley’s, Mr. K’s, Lupie’s, Smokey Joe’s, Neighborhood Theatre. They attract people who don’t try so hard either. These are my favorite kinds of places (and people).

Park Terrace wasn’t cool. The carpet, for one. I loved that awful carpet. The design was a trippy, kaleidoscopic pattern that persisted—loudly! unapologetically!—as trends around it dictated otherwise. The theater had no reclining seats, no 3D screen. Its sign boasted “STADIUM SEATING” like television previews once proclaimed “IN COLOR.” It’s not that the theater wasn’t nice—it was. Everything was clean, the staff always welcoming. It was that the theater didn’t try to be more than what it was: an old theater showing great movies. 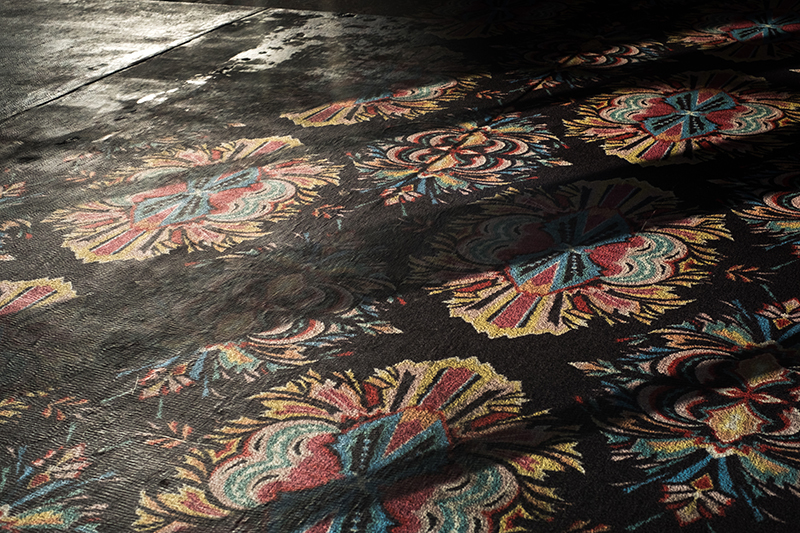 The psychedelic carpet inside the Park Terrace theater didn’t change with the times—but regulars didn’t care.

Park Terrace was no mom-and-pop business, however. Regal bought it in 2008, but when it did, it focused on independent movies with the occasional crowd pleaser thrown in. It was the champion of the films that separate the casual movie fan from the devotee. Subtitles don’t faze us. Black and white? Sure. Character-driven stories without plot resolution? Count us in.

We are the people who consider talking or texting during a movie—or even during  trailers—to be unforgiveable. Some of us stay through the credits out of respect to the crew, who aren’t even there to notice. A lot of us do this alone. Cool? Nope. Perhaps we were the only things to match that carpet.

I try to watch every Oscar best picture nominee, which means I practically lived at this theater each January and February. When other theaters had nothing but explosions and comic heroes on their screens each summer, this theater was my refuge. Park Terrace introduced me to some of my favorite movies. Midnight in Paris. An Education. It introduced me to quiet movies with unforgettable characters. Precious. Nebraska. It showed movies that left me grappling over what the hell I just saw. (Who’s seen The Square? Can we talk?) I spent many a night in that theater cozying up with a bag of popcorn and a good story.

A friend who grew up going to Park Terrace told me it was her family’s favorite theater because they liked to applaud after a movie. Doing such a thing at Phillips Place would earn sideward glances, but it never felt weird applauding at Park Terrace. I held my heart as she told me this. I’ll take unrestrained acts of gratitude over cool any day.

WE CONNECT with some places just as deeply as we do with some people. The luckiest among us have that perfect place to see a show, to decompress after a hard day, to celebrate after a great one.

Soon, these places hold our memories as much as our minds do. For me, it’s the barstools in Sir Ed’s where my husband Jimmy and I savored a snow day, watching the flakes through the tiny window while drinking Guinness until we giggled. It’s the table in Pike’s where my mom and I shared our favorite guilty pleasure meal—sundaes and french fries—while talking so much that a second of silence didn’t have a chance to interrupt us. It’s the Visulite soundboard from which Will Hoge mooned a guy who wouldn’t shut up during his set, causing the venue to erupt in cheers. Every time I go into these places, I see these ghosts of moments past. Sir Ed’s with Jimmy. Pike’s with Mom. Visulite with Will Hoge’s arse.

None of these were special occasions in fancy places, the kind of moments we create in order to remember. They happened when I never saw them coming and in the most ordinary of spots. It seems the places that give us our favorite memories tend to be the take-us-as-we-are ones that try the least to impress us, and allow us to lower our guard in return.

It’s not that I’m against new or nice. It’s fun to get dressed up for a night out at a new place. But cities that thrive on the new without anchoring to the old have all the warmth and charm of a movie set. We need those familiar places that are as comfy to enter as pulling on a hoodie on a chilly day.

Charlotteans focus on how often we rebuild and renovate, but I point to something less obvious but more insidious. That middle school lunch table ambition, that need to reinvent continually to fit what’s cool right now. Rebranding is an oddly self-conscious practice—we are trying to seem different this year!—that, when done poorly, contrives “authenticity” instead of honoring it. Brands should serve a mission, but too often, a new brand has become the mission.

And it’s not just businesses. I met a woman who introduced herself with her Twitter handle, which was a decidedly non-human name. “I’m no longer a person. I’m a brand. I’ve transcended!” she explained. I responded like a puppy who just heard a high-pitched noise: a curious tilt of the head and wrinkled brow. Surely, this is not good for the human psyche.

WHAT MAKES a landmark a landmark? Longevity, sure. But more than that.

It was about rising above current trends to set one’s own standard, about putting people before polish. It was about something that might provide a good lesson for Charlotte. And for us.

Park Terrace didn’t need to develop a compelling brand. It had earned a devoted following by remaining what it was all along.

Jen Tota McGivney is a writer in Charlotte. Connect with her at jennifer.mcgivney@gmail.com or on Twitter: @jen_mcgivney.

This article appears in the March 2018 issue of Charlotte magazine.
Categories: In Print, The Buzz