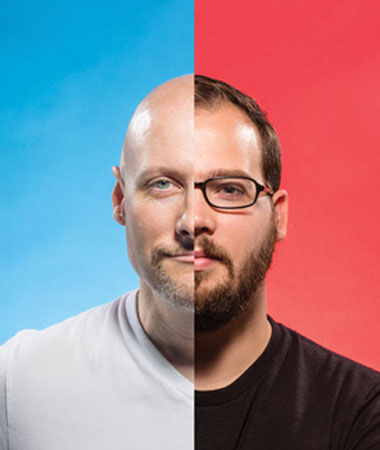 My name is Andy Smith. Before I was a journalist, I was an aspiring comic book artist. It seemed like a natural fit—getting paid for what I was already doing in the margins of my homework. But there was a problem: There’s already a comic artist named Andy Smith. This guy was born years earlier than me, and stole my moniker. This year, I moved to the same city as my unknowing adversary. From Marvel’s Spider-Man and X-Men to DC’s Green Lantern, the Charlotte-based Andy Smith has drawn some of the medium’s top characters. Finally, I had a chance to confront him. Our battleground was a Cotswold Starbucks.

ANDY SMITH: So, why did you become a comic book artist?
ANDY SMITH: I always drew as a kid in elementary school, and at the time it was mostly cars, which I still have a love for. But around when I was 10 or so, I saw an episode of Spider-Man and His Amazing Friends, costarring the X-Men, and it got me hooked on comics and superheroes. From that point on, I started drawing superheroes and collecting comics, and that’s what I wanted to do for a living.

AS: Finding out about you (as a kid) forced me to come up with a pen name—A. David Smith—since I thought I was destined to write and draw comics. You ever think about a pen name?
AS: I did in the beginning, just because it’s so generic. Andy Smith is just such a generic name.

AS: Yes, all of our IDs look fake, like a template.
AS: Yeah, you always get that at the airport. I played with using my middle name, which is Chris. Smith is still Smith, but at the same time, I had more of an issue with the name Andy than Smith. I couldn’t get rid of Smith—it was my dad’s name and my grandfather’s name. Growing up in the ’80s, Andy wasn’t the big popular name. It wasn’t a name you attributed to toughness. Which cracks me up, because I don’t know if you know this, but Andrew means manly. Going by Andrew always seemed pompous.

AS: So what brought you to Charlotte in the first place?
AS: We were looking for a place that actually had a climate. My wife does stuff in finances, and the big financial districts are in Charlotte and New York. New York was out. I knew people in Charlotte because of HeroesCon. So we came up here, looked at it, and we just liked it.

AS: You’re on the list of customers who reserve new comics weekly at the local comic shop, Heroes Aren’t Hard to Find. Will I have to change my name if I want to join that list?
AS: No. I don’t think so.

This article appears in the September 2013 issue of Charlotte magazine.
Categories: Buzz > People, Feature, The Buzz

Seven Charities Worth Your Dollar