Q & A with Jenn Grabenstetter

Us www.charlottemagazine.com bloggers like to give cyber-shout-outs to one another when we can. If I could, I’d do it willy-nilly, all the time. Go, Dine & Dish and Bride + Groom! Like that. However, it just so happens our fashion blogger is also the perfect fit for Revue’s inaugural Q&A—a weekly post wherein we’ll sit down with Q.C. stars and grill them on their latest theatrical, artistic, or musical ventures. Jenn Grabenstetter, editor of Where Charlotte magazine and Shop Talk blogger, is also an ensemble cast member of Theatre Charlotte’s upcoming production of Annie, directed by Ron Law. The show will run from September 10-26, and we sat down with her to get the bottom dollar on this production of everyone’s favorite, curly-haired musical. 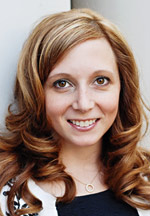 Revue: So what’s it been like rehearsing with so many  kids?

Jenn: I’ve been really impressed with them. Theatre Charlotte doesn’t do many productions that involve lots of kids, but they’ve just nailed all the music and the choreography. There were over 200 people that auditioned for the show, and 40 people in the cast, so these are really some of the area’s most talented kids. Our Annie is great; she’s played by Hannah Gundersheim, and her younger sister also appears as the orphan Molly. So it looks like they have a very talented family.

Revue: Tell us about your role(s).

Revue: Do you have a favorite?

Jenn: I like being featured in the "NYC" number. That’s the first musical number, and it definitely has the most happening. I get to do a fan kick, which is very Broadway.

Revue: So what’s going to set apart this production of Annie from other productions the audience may have seen?

Jenn: For one thing, the theater is really tiny. Theatre Charlotte’s been there since 1927, and while it’s been upgraded, it hasn’t grown. That means we’ll pretty much have a full house every night, which will be exciting. We use the whole theatre too; we go up and down the aisles, through the back doors. The audience will feel really close to the show, and be able to get wrapped up in the musical numbers. The show’s full of cheesy wink-winks at the audience, and when you’re really in the production, it makes it more fun and easy to laugh at those.