The Many Faces of Bojangles’ Coliseum

A look back at the venue's history, before it changes again

Since it opened nearly 60 years ago, the coliseum on Independence Boulevard has hosted circuses, college basketball, Billy Graham, Elvis, school graduations, and the Ice Capades. Now, it may be the cornerstone of a $77 million amateur sports complex that city leaders hope will help revitalize east Charlotte. Before it transforms again, here’s a look back at its many incarnations.

Oct. 14, 1950: Charlotte voters approve a $3 million bond issue to build a 10,000-seat coliseum and smaller auditorium off Independence Boulevard, just south of Chantilly School. The complex will be on the outskirts of town, three miles from Trade and Tryon. 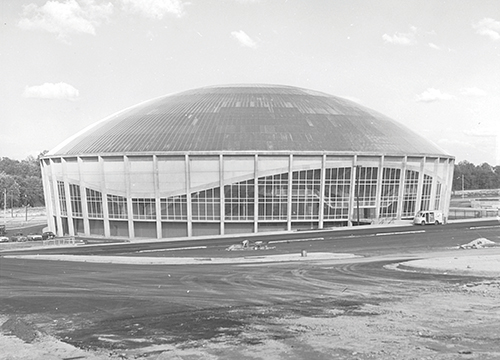 Sept. 11, 1955: An estimated 13,000 people turn out for the dedication of the new Charlotte Coliseum, then the world’s largest free-span dome—held up solely by exterior walls, with no internal support columns. Rev. Billy Graham delivers the keynote address.

June 30, 1965: After the Coliseum’s first decade of operation, General Manager Paul Buck reports that it has suffered through only one year in the red thanks to major events such as the Ice Capades, basketball, and country music shows.

April 5-14, 1972: In a 10-day stretch, the Coliseum hosts the Billy Graham Crusade, pro wrestling, Elvis Presley, and Charlotte Checkers hockey—an eclectic combination of acts that leads to an iconic marquee.

August 1988: A new, 23,000-seat Charlotte Coliseum, built to house the Hornets NBA team, rises on Tyvola Road, and the old coliseum shuts down.

Sept. 18, 1993: After a $4 million renovation and new lease deal, the old coliseum reopens as Independence Arena. The Checkers become its main tenant.

Oct. 21, 2005: Charlotte Bobcats Arena (later renamed Time Warner Cable Arena) opens in uptown. The venue not only becomes the home of the city’s new NBA franchise but also draws the Checkers away from Cricket Arena.

June 3, 2007: The Charlotte Coliseum on Tyvola Road is demolished.

August/September 2014: The City Council considers investing $25 million in a plan by Florida-based GoodSports Enterprises to turn the entire coliseum property—including the adjacent Ovens Auditorium and land now used for parking—into an “amateur sports village,” with a field house, hotel, restaurant, and the coliseum as its main events venue.

This article appears in the September 2014 issue of Charlotte magazine.
Categories: Opinion, The Buzz

The Mythology of Place